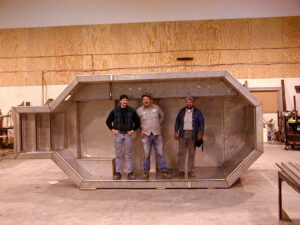 Leland, NC. Bradford Products, a stainless-steel aquatic product manufacturer, celebrates 40 years. A leader in the design and fabrication of luxury aquatic stainless steel products, Bradford specializes in the fabrication of stainless steel swimming pools, spas, water features and other custom vessels for both the residential and commercial markets. The fully welded, world class vessels are featured in homes and commercial facilities across the U.S. and internationally. With over 170 employees and more than 200,000 sq ft of manufacturing space, Bradford has completed more than 10,000 installations. 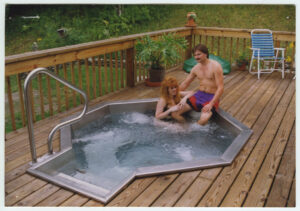 Mike Brodeur, CEO of the company remembers “Bradford started out as an idea from my father, Dale Brodeur, Sr. In the late 70’s he visited a hotel in California that had a wine barrel hot tub and he loved it.” He went back home to Connecticut and attempted to purchase one, but there was nothing similar on the market, so he decided to build one himself. At the time, he owned a metal fabrication company. He sat down with an engineer, they designed a stainless-steel tub and he built it in his backyard. “At the time my folks loved to entertain, and they often had many people at the house. Their friends all loved it and asked how they could get one.” Dale Brodeur Jr., President of the company says. The idea he put into fruition quickly became a lightbulb moment. Dale Sr. made some spas for friends and his creation started to gain momentum through word of mouth. “At that point my father knew he had a good idea, so he started Bradford Products.” 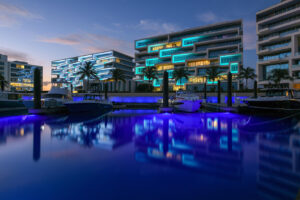 The Honeycomb (right) and The Cube (left) in Albany, Bahamas filled with Bradford vessels.

It’s been 40 years since since Dale Sr. built the first Bradford spa. Since then, the company has remained family-owned and has evolved into a major leader in the industry. Bradford continuously adds to their expansive product line. Bradford’s fully welded, self-supported, prefabricated vessels are the ideal solution for rooftop or elevated aquatics. The leak-proof nature of stainless steel combined with the impressive strength-to-weight ratio of Bradford’s vessels make them the safest choice for high-risk environments where pool failure would be detrimental. 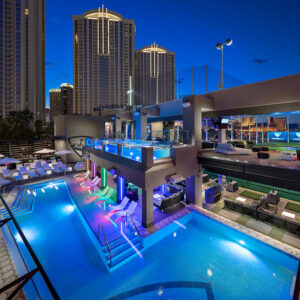 Bradford has a major presence in the commercial aquatics industry with significant projects in Las Vegas, New York, Miami, Mountain West and abroad. Their exponential growth and success in the commercial aquatic industry has also been echoed in the residential market. The MPool, released in late 2021, is Bradford’s first fully welded stainless steel pool designed specifically for in-ground, residential use. Available in five lengths and two edge styles, the pool features full-width entry stairs and a choice of a full-width sun shelf, bench seat or open end for the opposing side. The Bradford Signature Series Spa collection was also designed with residential clients in mind. Equipped to be installed in ground, partially recessed or on grade, the spas provide flexibility for homeowners to incorporate it into their unique landscape. 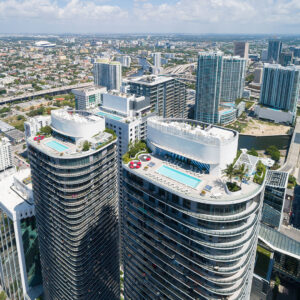 Bradford’s presence in the industry is constantly expanding, with new projects around the world and new products launching in various sectors. Their 170,000sqft facility in Leland, NC has the capacity to handle  multiple, large-scale projects while their highly mobile workforce is still able to complete onsite installations.